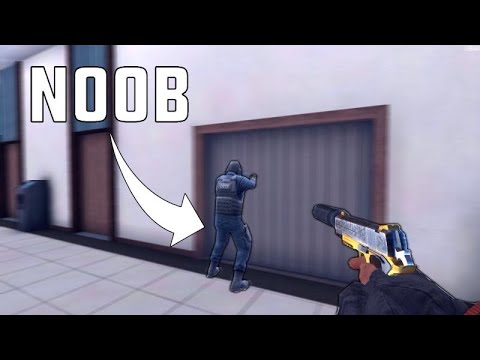 Essential Ops is a first-person shooter which you just have to play. Available worldwide on Google Play in a form that may be best described as a completely playable game but one which is far from finished, this is a remarkably enjoyable title despite its rawness.

The game's inspiration is obvious: it is Counter-Strike. You get one life in the Defuse mode that was the center of the match before group deathmatch was released, and will spend money you make it on weapons, needing to rebuy your weapons and gear if you die. Thus, you can go big on better weapons and technical gear, risking it all if you die and possibly costing you your great loadout and possibly leaving you poorer another round. Then, you and your staff, either terrorists attempting to kill all the counter-terrorists or plant a bomb, or even the counter-terrorists trying to defuse the bomb or wipe out all of the terrorists, then go , in a nutshell, sub-2-minute rounds which are to 13 wins. The game is intense because one mistake will cost you and your staff. Plus, the C4 you must plant as the terrorists may be used for and against you -- that the enemy could see where it can be, but it can be dropped and used to trap the counter-terrorists if they are not careful.

Critical Ops is more in an open beta state compared to something that's actually released at this time, though the public can access it on Facebook and Android, and the game is available in certain countries on iOS. It's definitely in a rough state at the moment. Defuse was the only game mode until the late-May-2016 inclusion of team deathmatch. That, and there are 4 maps to perform . The interface is still undergoing tweaks, though that late-May 5.0 update dramatically improved the game. However there are still rough patches that feel short of a major-budget first-person shot.

But understanding that this is bare makes it sort of endearing. The center sport itself simulates the Counter-Strike experience quite well. You may get a similar experience to a well-known classic, and also you can play it where you want. And it is really constructed for signature controls; the auto-aim helps out a lot. You have to be good and cautious with touch controls, but the game does a satisfactory job at creating for touchscreen inaccuracies.

Mobile gaming enthusiasts have a soft spot in their hearts for mobile games that are flawed but challenging. They will endure games which are like their big console and desktop counterparts since they want these experiences, not tied to a computer or console. At times, they don't even have a computer to play them on. And to be clear, the developers that are making these games often don't have the tools that big-name companies do. For example, another multiplayer first-person shot, Bullet Force, is made by a high school student. And while gamers get flak for being angry and irrational, they're rather understanding of programmers who are ambitious on mobile.

Some players don't like the designation of pay-to-win, always, but a number of people don't care for games that allow players to find anything different, better still, by simply paying. Not so with Critical Ops. Everyone receives the identical loadout, and can not alter the weapon selection the game provides. The only"benefit" you can get is distinct weapon skins. They do not have some effect on weapons, they all do is affect how your gun appears. You can't pay to acquire better weapons or to unlock weapons earlier. It is all personalization.

Regardless, it is something that the hardcore players who would enjoy this kind of game will favor. At the heart of it, it is based on ability, but the dedicated enthusiasts can still show off to other people.

The cool thing about Vital Ops is that you can play it from other Android players, iOS players, and even PC players on Facebook. Everything works with no issues at all. Along with your account transfers between devices using Facebook Login, which means that your skins and stats take from game to game.

If you don't need to play against PC gamers because they have mouse and keyboard to use against youpersonally, filter out cross-platform games, though it's difficult to tell who is about what platforms. Shadowgun: DeadZone is a sport with similar cross-platform multiplayer, and players complain about PC players using the benefit. You can make certain you're on an equal playing field by filtering.

It is easy to jump in and out of matches without a punishment, and matches consistently have fluid team inhabitants. It's not ideal, but people play mobile games in not-always-ideal ailments. Hence that the game is sensible not to punish people for having to leave. Rounds in the present game mode are quick, though matches are lengthy. Nonetheless, there's that expectation that games are going to be fluid and people have reason to bond. The game doesn't really offer much in the way of rewards for winning or sticking around, but it functions in a feeling that folks stick around because it's what they want.